GK Ramps Up for Production of the Grady Twin Pak Baler

GK Ramps Up for Production of the Grady Twin Pak Baler 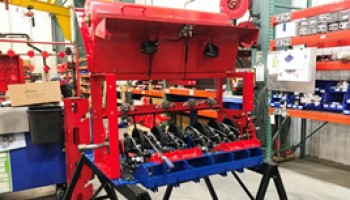 The farmer-built Twin Pak Baler punches out small bales with big baler efficiency. Jason Grady and his father Mike designed the double Grady Twin Pak Baler, which reaches about 85 percent of the tonnage per hour a big baler can produce and 2-3 times more bales than the fastest small baler on the market. To get the productivity level up, they used a single big-baler pickup and a plunger that presses each flake, but also cuts it in half. Each half bale is triple tied. As bales exit the baler, they drop in an offset pattern for ease of pickup by stackers.

GK Machine has re-engineered the Twin Pak for production and has added a new gearbox with a forward facing flywheel like big balers have and other small improvements. “The adjustable width chamber can produce 14, 15 or 16 by 21-inch bales, as hard and heavy and as long a bale as you want,” says Grady. The computer system tracks flake count, moisture and hydraulic temperature, as well as bale count for field and lifetime. With room for 30 rolls of twine, the Twin Pack can produce 11,000 bales without reloading.

Grady has already placed several orders with GK Machine for the Twin Pak Baler and more sales orders are in the works. As a custom harvester, Grady knows the value of a well-built machine and he believes this machine will easily last for more than 20 years. Grady and GK Machine will highlight the Twin Pak Baler at the World Ag Expo (Feb. 2020) with the goal of receiving even more orders for this efficient baling machine.