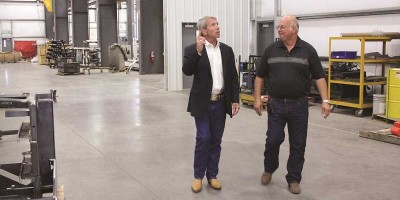 Rep. Kurt Schrader visits GK Machine in Donald for 'Made in Oregon' tour

Congressman Kurt Schrader spent several days in August visiting with locally owned and operated manufacturing companies throughout Oregon, and his tour included a couple stops in the Woodburn area.

Schrader is the Democratic representative for Oregon’s 5th Congressional District, which covers all of Marion and Polk counties, as well as Tillamook and Lincoln on the coast, and the southern half of Clackamas. He is seeking re-election for a fourth term in office in the November general election.

Dubbed “Made in Oregon,” Schrader’s tour of businesses in his district was intended to “highlight the men and women who are expanding Oregon’s manufacturing industry, providing jobs and strengthening our economy,” according to a release from his office.

Schrader “recognizes the important role local businesses will continue to play in the economic recovery, and is excited to spend time learning about the various industries represented here,” the release said.

The tour included stops at GEM Equipment Inc. in Woodburn Aug. 12. Established in 1969, GEM?is a leader in the French fry industry, engineering, manufacturing, installing and repairing commercial fryers and blanchers that are used by restaurants throughout the country.

Grossen showed Schrader many of the high-tech machining and engineering equipment his employees use, as well as the buildings that comprise the company’s recent 70,000-square-foot expansion. A?building that will add an additional 36,000 square feet of space is still under construction.

“It’s very impressive,”?Schrader said after touring GK Machine. “It’s just so amazing that, in a little town in Oregon, you’ve got a 22nd-century manufacturing facility, supplying the world. It’s the American dream.”

Grossen also shared with Schrader his company’s continuing difficulties in filling the new engineering, welding, machining and other positions made available by the expansion.

He said there is a significant lack of qualified and experienced candidates for the technical positions, while GK’s initial and random drug-screening program (which Grossen called a necessity in an industry that relies on such sensitive and expensive equipment) has narrowed the field further.

Grossen said he has even noticed an uptick in positive drug screens for both current employees and applicants since Washington state legalized the use of recreational marijuana.

He said GK has at least 50 current openings.

To commemorate the company’s expansion, GK?is hosting an open house and customer appreciation day from 11 a.m. to 6 p.m. Sept. 10 at its facility, 10590 Donald Road N.E.

There will be lunch served from noon to 2 p.m. and live entertainment from 1 to 6 p.m. For more information, visit gkmachine.com or the company’s page on Facebook.

Schrader’s Made in Oregon tour, which wrapped up Friday with visits to American Grounding Systems in Toledo and Near Space Corporation in Tillamook, also included stops in Lake Oswego, Tualatin and Wilsonville.